Did a short photo session with Mandi, a model I met through Model Mayhem. We went to Twin Falls for the shoot but due to time constraints, tourists, and lots of mosquitos, we didn't quite have enough time to do a lot of different looks. 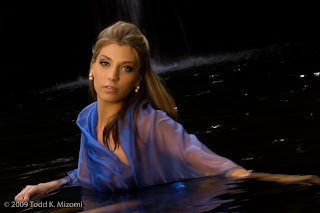 I first attempted to do natural light, using California Sunbounce reflectors. Since the sun kept going behind the clouds, I ended up having to improvise. I setup a SunBounce mini on a lightstand, and fired an SB26 with a 1/8 CTO gel into the reflector. I setup another SB26 with a 1/8 CTO gel on the rocks behind and to her left to give a little separation from the background. Didn't really need to, since there was some sunlight coming in that lit her hair quite nicely. 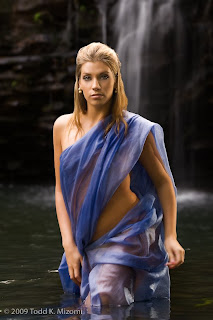 To get the smooth look of the waterfall, I used a slow shutter speed, somewhere around 1/8th I think. Had to try several times, since my tripod head wasn't cooperating with me and I had a lot of blurred shots. Think I might switch to a Really Right Stuff ballhead when I can afford it. 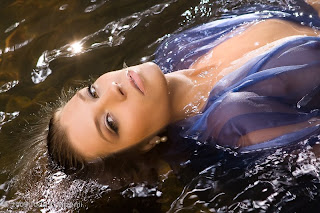 The light REALLY started to get good just before we had to leave. The sunlight coming through the trees was sparkling off the water quite nicely. Only had time to fire off a few shots so I'm going to have to try this concept of a model in the water with fabric again someday.
Posted by MauiPhoto at 6:11 PM 1 comment: 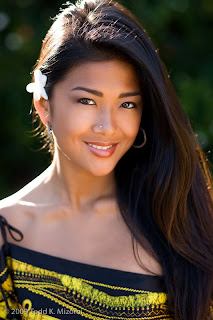