When Apple introduced the iPad at the beginning of this year, I knew immediately what I would want to use it for - viewing images from my camera during a photoshoot.  While there is a camera connector kit

available that allows one to plug in a memory card and transfer images to the iPad, I wanted to be able to do it wirelessly during the shoot.  It just feels more productive to have the crew and myself to be able the view the image on a large screen seconds after it is taken, instead of viewing it on the LCD on the back of the camera.

I previously did this with a Canon 1D mkII

and my Macbook Pro.  While it did accomplish what I wanted it to do, the setup did have some drawbacks.   The WFT-E1 was Canon's first attempt at doing wireless transmission, a big bulky unit that screwed onto the bottom of the camera and plugged in via firewire or USB.

It also had an external antenna that got in the way sometimes (and eventually broke). Setting it up for networking was also a major pain in the tuckus and sometimes it would just refuse to behave. At one point I went back to using a long USB cable and shot physically tethered to the computer, but long cables and my clumsy feet are a disaster just waiting to happen.

I also tried a similar setup last year with the Eye-Fi card and a Dell Mini 9 hackintosh.  However, I had heard on the Eye-Fi forums that other people were experiencing corruption problems when using the Eye-Fi SDHC cards in CompactFlash adapter cards in their DSLRs.  The newer X2 series that are 8GB seemingly do not work at all with the CF adapters in cameras like the 5D mkII, which really sucks.  I personally never came across the corrupted image problem with the hackintosh setup, but since I also shoot weddings, that was something I was not willing to take a chance on.

The Eye-Fi/Dell Mini 9 hackintosh setup is still being used for family gatherings and other things, but without the CF adapter. I'm currently using it in a Canon G9 and might upgrade to the current G12 or the EOS 60D which now uses SDHC cards.

I really wish Eye-Fi would make a CompactFlash version of their product.  Apparently I am not alone in this - on the Eye-Fi customer support forums there are a lot of requests by their users to do so.  Why they continue to ignore this request, I have no idea. 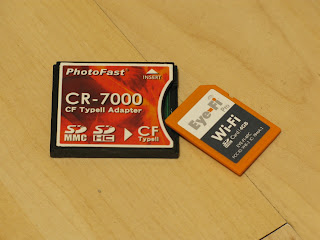 Thankfully Canon has incorporated their WFT transmitters into vertical grips for their newer cameras making it MUCH easier to use than the WFT-E1.  They also brought down the price - still expensive at about $700, but remember, they USED to cost around $1500! 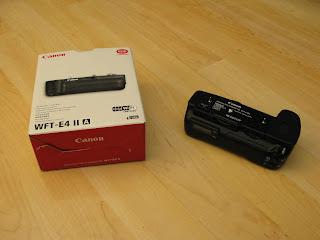 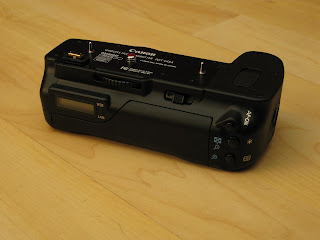 One minor gripe about using the WFT-E4 transmitter - while it replaces the vertical grip and takes the same kind of battery as the Canon, the battery only powers the transmitter and not the camera itself. 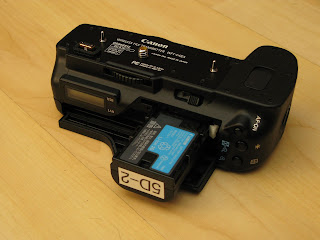 So you have to have one battery in the camera, and one in the transmitter.  If your camera battery runs out, you have to unscrew the WFT-E4 to access the battery compartment of the camera body.  Not something you want to mess with when you're pressed for time during a shoot.

I'm hoping in the future  Canon will figure out a way to put 2 batteries in the WFT transmitter and have it power BOTH the transmitter and the camera.  I mean c'mon if Eye-Fi can do wifi transmission from a freaking SDHC card for less than $150, Canon SHOULD be able to figure out how do this at more than 4x the price and with much more space to work with (Hey, I can dream, can't I?). 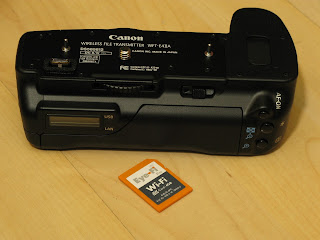 Yo, Canon!  HELLOOOOOOO?
When the iPad was released, I started looking into ways that I could shoot wirelessly tethered to it.
One of the obstacles is that like the iPhone, the iPad does not allow creating an adhoc network unless you jailbreak it, something I was not brave enough the mess with.   Yet.  ;-)

Fortunately, I came across this article by Rob Galbraith which made it much easier to setup. It incorporates the use of a battery powered router, such as the Aluratek CDM530AM 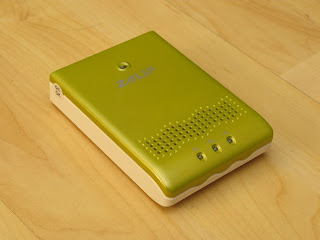 Yes, I know - lime green.  Yeek. But hey, it works and it works very well.
So this is now my current Canon to iPad field setup: 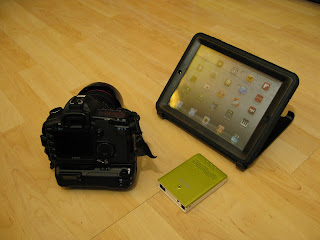 Thanks to Rob Galbraith's excellent article, I had the setup working in about an hour. I have two configurations for the WFT-E4 - one field setup which sends the images via the Aluratek router to the iPad running Shuttersnitch, and one studio adhoc setup that sends the images directly to my MacBook Pro and importing into Lightroom, like I did previously with the WFT-E1.

The networking setup on the WFT-E4 is a little easier than with the WFT-E1, but it can still trip you up if you're not familiar with networking (and the included manual is basically worthless).  I found this guide by Julian Love Photography very helpful in setting up the ftp connection to my Macbook Pro.

In testing this setup (meaning me chasing our two cats around the house with my camera), the delay between shooting and viewing the images on the iPad is about 5-8 seconds, similar to what I was getting with the Eye-Fi and my hackintosh.  I have the 5D set to shoot RAW + Med JPG. Since I only plan to use the iPad for image review in the field, the WFT transmitter is set to transfer only the JPEGs, which is much faster than trying to send the RAW files (Plus the iPad's storage space is only 64GB and much of that is devoted to games and training videos).

The router's battery is said to last several hours, and the iPad's battery lasts pretty much all day, so I'm thinking this might work well in the field. The iPad fits into this case I picked up in Japan and the router fits into the side pocket. I'm thinking I can have this in a shoulder bag during a wedding and have the iPad collect images as I'm walking around shooting, then pull it out at the end to show the images to the client. 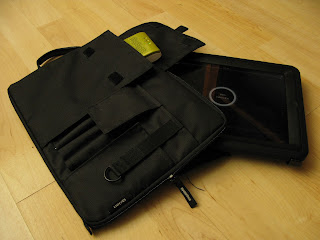 I'll also be taking this setup with me to Japan next week as I have several model photoshoots lined up.  I will try to post the field results in a later blog entry.
Posted by MauiPhoto at 3:44 AM 4 comments: