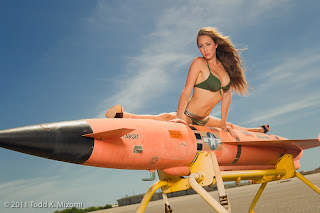 For one of our setups at the Naval Air Museum, we did a take on the classic scene from the movie  "Dr. Strangelove" where Major Kong rides the atomic bomb as it's dropped from the bomber.
We had neither the budget nor the equipment required to actually suspend a rocket and a model safely in midair so we had to do a lot of improvising with what we had.

The bomb (actually a target drone) was mounted on a cart so that it could be wheeled around easily. We had to figure out how to shoot and light it so that a minimum of post-production work would have to be done.

We started by pointed the rocket into the wind so that when the model was in position on the rocket, the wind would be blowing her hair out behind her. 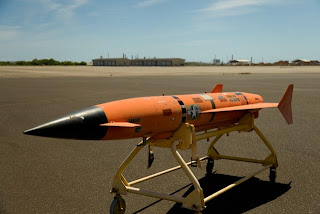 After shooting it from several different vantage points, we settled on an angle not completely sideways and not completely straight on to the camera, but just enough off center so that you can tell it's a rocket.  Shooting from a low angle would put the model against the blue sky, and make it easier to take out the buildings in the distance behind the rocket.

Had to lie flat on the ground to get this camera angle.  When you are looking at a scene and are trying to figure out the best angle to shoot it at, don't forget to look at the scene from different heights as well. Get down low on the ground or climb up on a ladder or something.  You never know when you'll stumble across a really cool shooting angle when you change the height of where you position the camera. 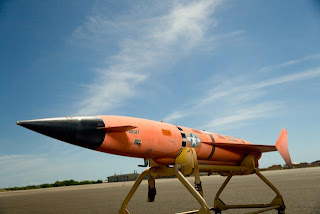 A few test frames revealed that the undercarriage of the rocket body was a little dark.  To help sell the illusion of the rocket flying through the sky, we laid out the white material of a  California Sunbounce Sunswatter

on the ground in front of the rocket to bounce some sunlight into the shadow areas. 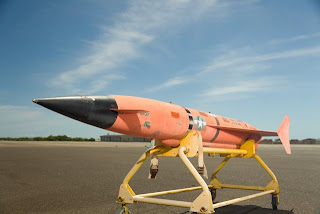 We used a WL1600 with a beauty dish for the main light with the sun as our hairlight. To help put more of a rim light on the model (and simulate the glow from the rocket engine) a second light was added to the scene - an AB800 with a 7" reflector positioned near the tail of the rocket. 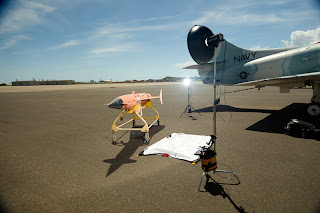 While the model was getting her makeup touched up, I shot some background plates of the clouds in the sky that I would later composite behind the model to make it look like she was soaring through the air. 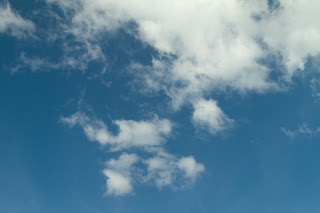 I used a small aperture, around f11, added a ND filter so that I could set the camera to a very slow shutter speed and panned the camera across the sky while pressing the shutter button.  It took several tries until I got the right blend of blurred clouds and sky. 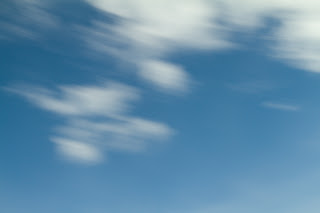 Once Alyssa was ready, we started shooting different poses on the rocket until we got a couple of good shots to work with.

One of the final composites: 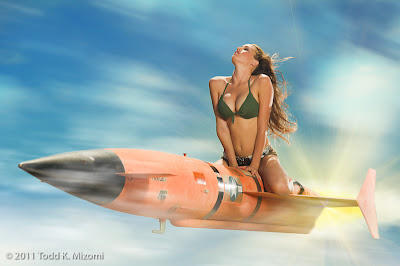 Posted by MauiPhoto at 8:32 PM