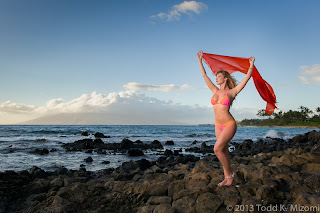 During our pre-shoot meeting, Charlotte indicated that she wanted to have some scenic shots of Maui where she was incorporated into the scene (as opposed to images where she was the primary subject).  For the second half of our shoot together, we headed down to Ulua Beach to catch the sunset. 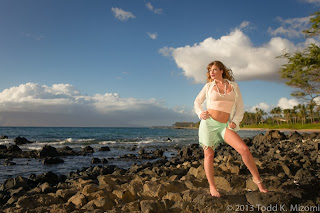 For shots looking down the coastline, we used a silver California Sunbounce Pro reflector to soften the shadows. 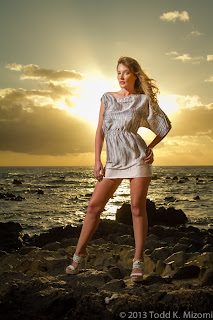 As we got closer to sunset, and started shooting into the sun, we switched to using a White Lightning X1600 with a beauty dish for the main light. 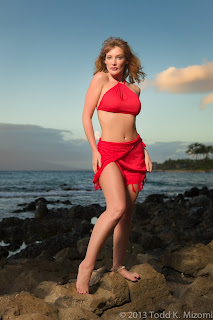 So glad I had the opportunity to shoot with this model again after all these years.  Working with a professional model of Michelle's caliber makes a photographer's job SO much easier. She just kept knocking the poses and looks out of the park so I basically all I had to do was point and shoot. ;-) 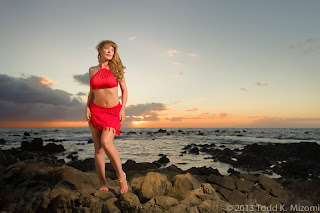 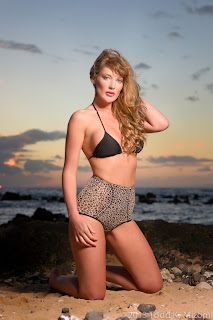 After the sun dropped below the horizon, I had Jen hold an SB26 with a CTO gel just out of frame behind the model to add a bit of hair/rim light to the model. 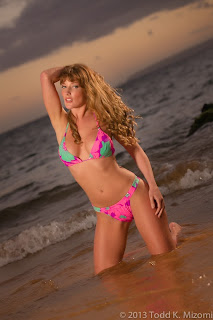 While I really liked the look we were getting from the addition of the rim light toward the end of our shoot, it was very hard on the assistant because she had to stand practically in the surf and get soaked in order to get into the right position.  Jen, you are awesome! :-) 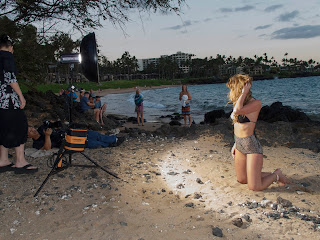 It was very challenging to shoot on this beach, mainly because of the crowd that was gathering off to the side to check out what we were doing. As a result, there were a few other ideas we wanted to try but decided not to. Always try to stay within the model's comfort zone. If your model's happy, you're happy.  If your model's not happy, NOBODY is happy. ;-)

Posted by MauiPhoto at 4:54 PM