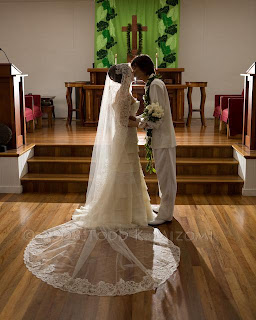 Ever since I started visiting Strobist to learn more about lighting, I've been trying to make it a habit of experimenting with what I've learned every chance I get.  This past Friday I had the chance to do a shot I've always wanted to try - backlighting the couple at the altar.
Usually with Canon strobes, you need to have line of sight to your slave flash in order for it to fire.  In the past I had used the ST-E2 transmitter on top of the camera to trigger the slave flash.  This was pretty much hit or miss whenever the slave flash was behind something - a door, a model, Darth Vader, etc.
Someone suggested I use 2 strobes - a slave off camera, and one on the camera as a master trigger.  The flash on-camera can be set to just triggering the slave, but not firing itself.  Apparently this allows for better range/reliability than just using the ST-E2 transmitter.
For this shot I had my assistant put the flash on the altar positioning it so that the head of the flash came right between the couple's faces.  I then fired off several shots until we got this one.  One of the things to watch out for is to make sure you don't see the flash head in the viewfinder when you take  the shot.  Since the flash is firing back toward you, if your camera sensor sees the direct flash, it will seriously underexpose the shot and you won't get the cool backlighting effect.
Posted by MauiPhoto at 8:41 AM No comments: