Apple's "Get A Mac" ad campaign featuring John Hodges and Justin Long has been getting a bit stale lately. Here's a fan-animated ad that totally blows them out of the water. You just need a little patience to get through the two lame human "actors" in the beginning. It's worth the wait though.

Posted by MauiPhoto at 11:29 PM No comments:

Some of the best images come when you least expect it.

For this particular look for Lindsey we experimented with several different things, trying to get it to work. We changed her jacket, her belt, posing, etc.

Lindsey happened to glance outside the window while the hairstylist was adjusting her hair and I snapped this frame. She wasn't posing, it wasn't really framed perfectly, and I don't remember if I took the time to really finetune the focus. It turned out to be one of our favorite images from this setup.

This was shot in the atrium of the building where I work. The model is standing next to a 2-story wall made entirely of glass. Great light to work with, like a giant softbox.

Outside it was overcast, so the light filling the atrium was a little too flat. I had my assistant Julie take an SB26 on a lightstand and position it outside the building on the other side of the glass right next to Lindsey.

With the SB26 set on 1/4 power shooting through a shoot-thru umbrella, we were able to add some directionality to the light.

1st shot of the shoot, originally uploaded by Mizomi Photography.

This past Sunday I had the chance to work with Lindsey, a new model here on Maui.

Jessica, our makeup artist, organized the shoot and she also had a hairstylist, a wardrobe stylist, an assistant, and even a video crew at one point. It was the biggest crew I've ever worked with. Everyone worked really hard and by the end of the day we were exhausted, but we got some great shots out of the shoot.

You can see more images from the shoot in the Flickr set here.

Came across this website a while back but forgot to mention it in the blog. DesignReviver has lots of cool Photoshop tutorials for retouching. If your primary photographic subjects are people and you can't afford a lot of plugins for Photoshop (like me), you should definitely take the time to check out this site.
Posted by MauiPhoto at 11:36 PM No comments:

Checking to see how Flickr interacts with my Blogger blog. At the same time, I've been going over images from some of my earlier shoots.

It's amazing what software such as Photoshop and Lightroom allow you to do these days. Many of my first model photoshoots were shot on JPG, which is not as easy to adjust as RAW. With the latest version of Lightroom, I've been able to go back and salvage images that I had passed over several years ago because of poor exposure or focus.

This image of Michelle is from a workshop I attended several years ago. One of the first times I worked with a professional model.

Shot in Hana with mostly natural light. Used a Gary Fong Lightphere on my 580ex flash to add a little bit of fill and catchlights in the eyes. Original JPG exposure was adjusted in Lightroom 2 about a stop or so.

Hmmmm.... I like how the images look when I post them from Flickr. Much easier to do blog posts this way as well. Gonna have to start doing that from now on.

Posted by MauiPhoto at 2:19 AM No comments:

Some more images from my shot with Dominika on Sunday. Ding Kings is such a cool place for a photo shoot! 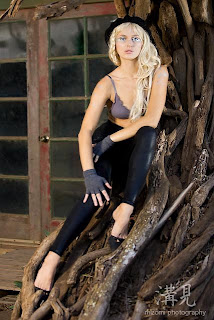 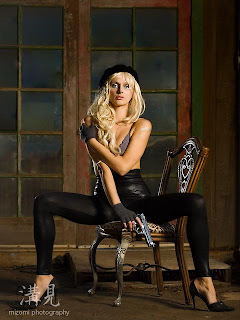 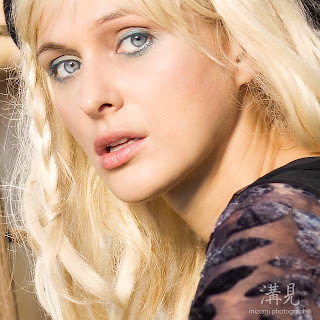 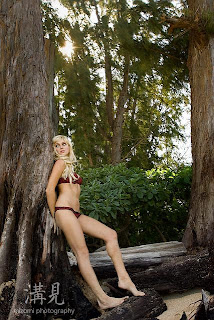 Posted by MauiPhoto at 1:49 PM No comments:

Yesterday's photoshoot was with Dominika, an actress/writer from L.A. who has been in many TV shows and films, including the forthcoming "The Vanquisher".

We first started out on a beach in Paia, where I got to experiment with my RadioPoppers for the first time since I received them. In the past I had been having hit or miss problems with Canon's infrared wireless flash system especially in outdoor settings. With the Radio Poppers installed on my ST-E2 transmitter and 580ex flash, I could just concentrate on photographing Dominika. 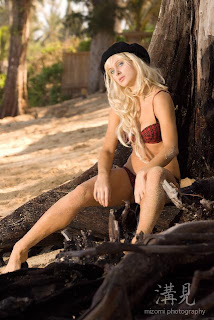 We next went to Ding Kings - one of the most amazing locations I have seen on Maui. It is a surfboard repair shop housed in an old warehouse in Kahului. Check out this blog for a tour of the place.

They were gracious enough to allow us to shoot at this location and we were able to get some really great shots. It was such an interesting place to shoot. Everytime we turned around, we found another cool thing to shoot. 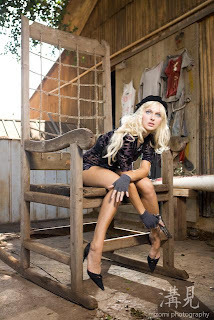 This was one of the most interesting things to shoot there. The people at Ding Kings built this set of chairs and table that is HUGE. Really neat stuff to shoot! 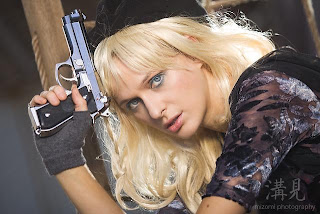 At this location I chose to use 2 lights. The main was an Alien Bees AB800 with a beauty dish triggered with a Pocket Wizard. To give Dominika some light to pop her out of the background, I used a Nikon SB26 on a lightstand behind her. I also occasionally used a silver Lastolite Trigrip reflector to add a touch of fill.

Thank you Dominika for being such a great subject to photograph, and special thanks to Ding Kings for allowing us to shoot on their property today.
Posted by MauiPhoto at 12:31 AM 1 comment: