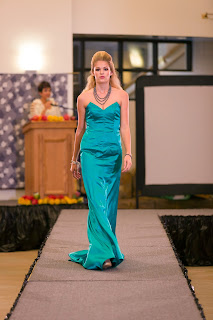 This year the UH Maui College Fashion Tech Students held their annual fashion show on campus in the cafeteria of Paina building.

Although this location was not equipped with lighting that would have been conducive to a fashion show, this was a much easier venue in which to photograph than in previous years at the shopping center. The house lighting was bright and diffused enough that we were able to mainly work with the existing light and use flash as accents. 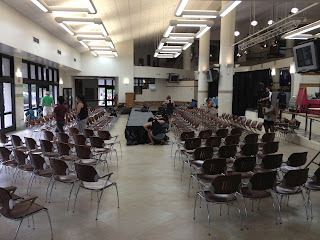 For this show they built a raised L-shaped runway platform which ran down the length of the dining room.

We used 2 Nikon SB26 flashes on 1/8th power for the back lights (circled in red above),  each with a CTO gel and a Pocket Wizard Plus II tranceiver.  One was mounted on top of a display case using a Justin Clamp, the other was on a lightstand next to the curtain which separated the model's dressing area from the main dining room. 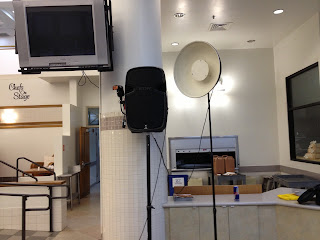 The main light was an AB800 with a beauty dish triggered with a Pocket Wizard Flex TT5 and AC9 adapter.  This was positioned about 20 feet from the end of the runway, against a counter next to one of the loudspeakers so as to minimize the chance of someone tripping over it.  This also allowed us to run A/C power from the nearby column instead of using a battery pack for the main light, which allowed us to fire the shutter more rapidly.

The event was photographed with a Canon 5D mkII with a 70-200mm f2.8L IS II lens. ISO was set to about 800, with shutter speed at about 1/125 and aperture of 2.8 to blur the background.  Focus was set to AI Servo to track the models as they walked down the runway.  A Pocket Wizard Flex TT1 transmitter was used on the camera's hotshoe to fire all three strobes.  The addition of an AC3 zone controller on top of the TT1 allowed us to adjust the power of the AB800 from the camera position.

To see more images from the show, visit our facebook page .
Posted by MauiPhoto at 1:40 AM No comments: