The second time around 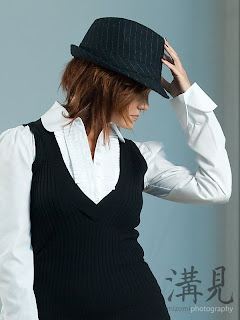 Last year I had the chance to work with Natalie, a model/actress I met through Model Mayhem.

Today I had the chance to work with her again, which was a lot of fun. Natalie is such a great model to work with - very easygoing, great attitude, and very patient with me (which is a big help since I'm still experimenting with lighting techniques.).

She has a new hairstyle, which is much shorter than it was when we first shot together. I thought it looked pretty cool and it added some nice variety to my portfolio. This was one of our favorites from today's shoot. 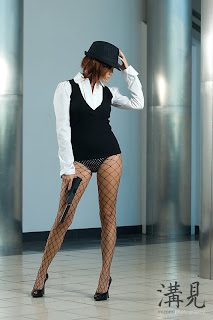 For this session, we shot in the atrium of the building where I work at. It has these giant steel columns as part of the architecture which I thought would be cool to try with her red dress. 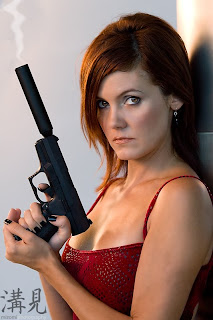 This was done with two SB-28 strobes: the main strobe (1/2 power) was gelled with a CTO + 1/8CTO gel, while the rear (1/4 power ) had a 3/4 CTO. Both shooting thru white umbrellas to make a larger lightsource. I had originally planned to try to make it look like a night shoot by setting the white balance to tungsten and let the daylight filtering through the glass wall turn everything else blue. The problem with using umbrellas as a light modifier is that they throw light all over the place. I was getting some CTO colored light on the back wall, so I couldn't get it to go blue enough for what I had in mind. It was also late afternoon, so a lot of the daylight was fading away.

I think the next time I try something like this, I'll switch to softboxes instead of the umbrellas and remember to bring a couple of gobos to keep the unwanted light off the background.
Posted by MauiPhoto at 11:02 PM No comments:

Stumbled across this site that produces short videos to explain complex topics. For someone like myself who struggles to keep up with rapidly changing technology, this is a godsend.


They have videos that cover a wide range of topics - from online photo sharing to explaining how we elect a president. Check out The Common Craft Show.
Posted by MauiPhoto at 7:07 PM No comments: