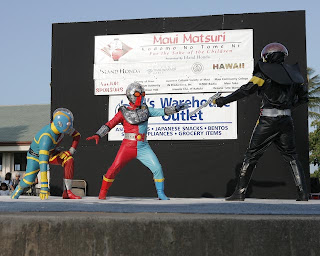 For the past few years, the Maui Matsuri has featured live action performances by Kikaida and Kikaida 01.  These are Japanese tokusatsu superhero shows from the 70's that were recently brought back to popularity thanks to the great people at JN Productions in Honolulu.  I have had the honor of being asked to videotape the performances almost every year, and it is just so much fun to see the great costumes they make and the enthusiasm that goes into each performance.
The show also features the actual Japanese actors from the TV series - Ban Daisuke and Ikeda Shunsuke. It's great to see them interacting with all their fans.  Many of the kids (like myself) who grew up watching these shows now have children of their own, so now there is a whole new generation of Kikaida fans.  JN Productions has even created a website dedicated to Kikaida and all the other Japanese superhero shows we remember when we were kids - Generation Kikaida. 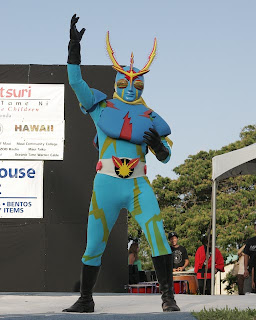 This year they also introduced Inazuman, another Japanese superhero from the 70's.  I vaguely remember having one of the Inazuman action figures when I was a kid. If I had kept all the Japanese superhero toys I had from my childhood, I'd probably have a small fortune by now.
JN Productions is bringing Inazuman to DVD later this year.  Definitely will have to pick that up. 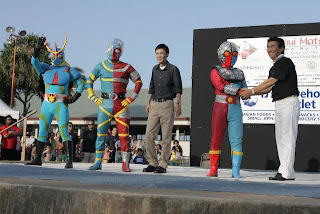 From left to right: Inazuman, Kikaida, Ban Daisuke,Kikaida 01, Ikeda Shunsuke.
The only show that I've missed so far is the Kamen Rider V3 show.  That was one of my favorites, but the year they brought him over to Maui, I was away at a photo workshop and couldn't videotape the show. :-(
You can see more photos from the show and from past shows at GenerationKikaida.com.
Posted by MauiPhoto at 10:59 PM No comments:

Stumbled across this today - a commercial about a bunch of crooks breaking into a bank.  It's in Thai, but subtitled.  Great payoff at the end.
Posted by MauiPhoto at 3:30 PM No comments: 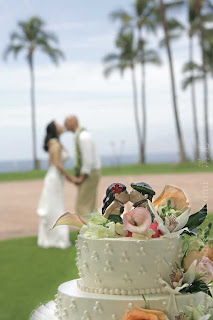 I had the honor and pleasure of videotaping the wedding of my friends Joanne and Kevin yesterday in Kaanapali, Maui.  Although it had rained the night before, the weather cleared up in the morning and they had a very nice ceremony at the old airport beach.  Congratulations you two!
Posted by MauiPhoto at 10:26 AM No comments: