By the time we were done with the shoot at Iao Valley, it was near sunset.  We had just returned to the studio and started unloading gear when our makeup artist Kat yelled out to everyone to look at the sky.

The setting sun was starting to light up the clouds in the sky, making a really cool background for a photo. The problem was that we were in the middle of a large parking lot, surrounded by trees and lamp posts, with no place for  Shawna to stand to get a clear shot of the sky.  We could have gone over to the beach across the street, but by the time we got there, the colors in the sky would have faded.

With no time to change location/wardrobe/makeup, we had Shawna scramble up on top of Q's truck and stand on the roof. 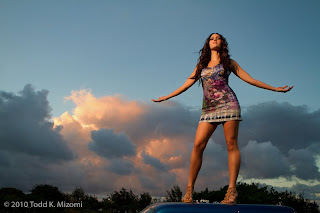 By shooting Shawna from this angle we got rid of the distractions in the parking lot, and also made her look 10 feet tall. :-)

The sun was behind the mountains so there was no direct light on Shawna.  In order to simulate the light of the setting sun on her, we used a 580EX flash and an ST-E2 transmitter, augmented with a set of Radiopoppers.  This was mounted onto a painter's pole that was modified with a Kacey Pole Adapter so that Quddus could position the light high enough above Shawna to simulate the light from the setting sun. 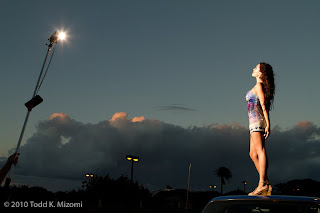 Because we had to work fast against the fading light, I set the camera to manual mode, iso 200 at f 5.6 and left the flash in fully automated ETTL mode. I let the flash determine the exposure on the model while I adjusted the camera shutter speed to either lighten or darken the sky. 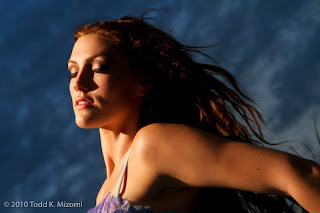 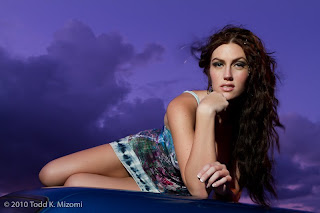