Whenever I work with model and a MUA (makeup artist), I usually like to shoot the makeup session as well. This is similar to shooting weddings when I shoot the bride getting ready, except we don't have to worry about rushing to a wedding. This gives me time to experiment with new ideas and techniques, which I can later apply to when I shoot a wedding.

This also serves to kind of break the ice, especially when working with a new model. It's also great for getting on the MUA's good side, when you offer these images to them for their website (Being friends with a great makeup artist is always a good thing for photographers that shoot models). I always ask both the model's and the MUA's permission first before shooting the makeup session, and haven't been turned down yet.

This image is from a workshop I attended several years ago, my introduction to the world of photographing models.

The setting is actually in the kitchen of the house the models were staying in at this workshop. I used a Canon 1DmkII with a 70-200L lens to throw the refrigerator behind her and the makeup artist standing in front of her out of focus.

Main light is a Gary Fong Lightsphere on a Canon 580EX pointed straight up. The edge light is natural daylight coming in through a small window behind her and to the right.

This is actually cropped in from a slightly wider over-the-shoulder shot that showed more of the kitchen and the MUA. I almost didn't use this picture as it was totally unplanned and unposed, but I saw that she had a great smile in this shot. When I took a closer look at the image, i liked the way the outside light kind of wraps around her chin and saw that a tighter crop would make a great headshot.

Posted by MauiPhoto at 11:57 PM No comments:

More from the shoot with Mokihana

A few more shots from Sunday's shoot with Mokihana:

Did this headshot with two SB26 strobes on lightstands arranged one above the other and shooting inbetween them for the pseudo ringflash look. Upper one at 1/4 power is in the larger SD softbox and the lower one at 1/8th power is in the small Photoflex Q39. 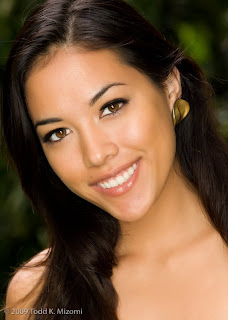 This is with the same sunset style lighting I described in my last post. 2 SB26s with gels (Front 1/4CTO, back full CTO). Main light in softbox, rim light was bare with the gel. 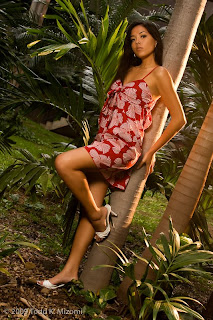 Canon 1DmkII ISO 400 1/250@f8 70-200mm L (non-IS) at 70mm
This last one is a shot I've been wanting to do for a long time, and I'm very thankful that Mokihana was brave enough to attempt it. To be fair, she wasn't in any real serious danger at the time we made this shot. In fact I made sure to keep her as far away from the edge of that cliff as I possibly could.

Lighting is just the SB26 in the SD softbox, I don't remember if it was 1/2 or full power at the time. 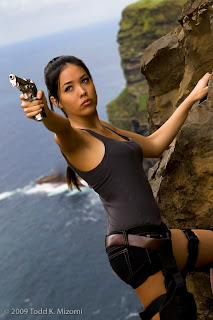 Model shoot with Mokihana + behind the scenes 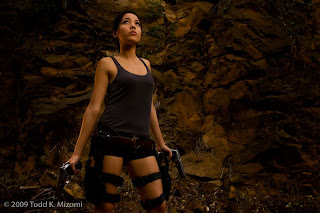 But thank you, I do appreciate the feedback. I've been mostly writing this for reference for myself when I need to remember how a particular shot was done. I'll try to make it interesting for you. No guarantees though.

This past Sunday I had a shoot on Oahu with Mokihana, whom I met through Model Mayhem.
We decided on two looks - a casual outfit and a "Tomb Raider" style look. 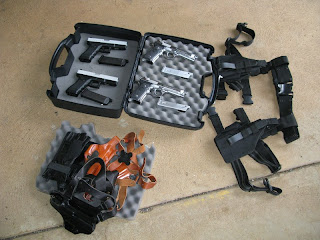 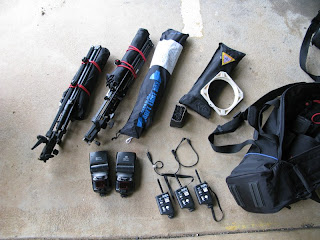 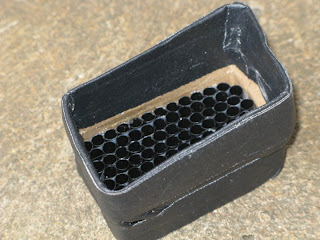 Amazingly, all that lighting gear fits into this Slik tripod case: 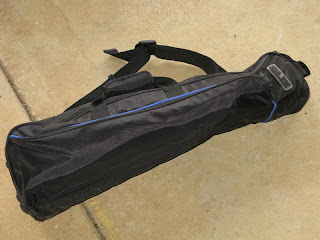 Back light with CTO gel: 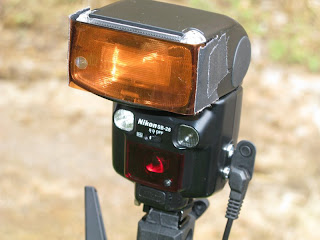 The two softboxes side by side. Photoflex is on the right.
The larger SD softbox folds like an umbrella. Picked it up in Japan. 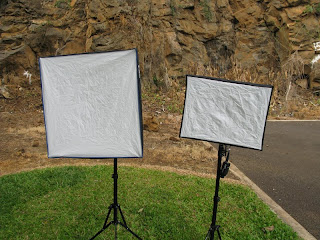 Because the SD softbox mounts on the lightstand like an umbrella, the SB26 sits too high if seated in the coldshoe mount. Ball bungies to the rescue! 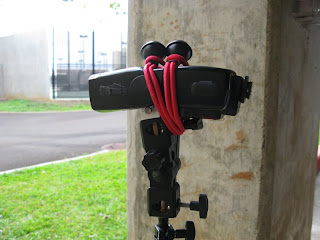 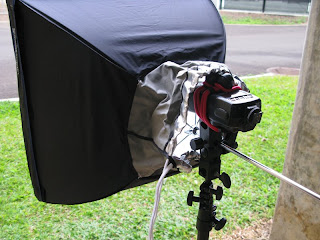 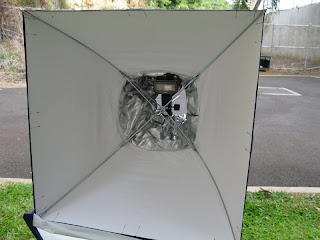 For the Tomb Raider image at our first location, we wanted to give the impression that she was in a cave. The rock wall nearby(seen in the shot with the two side by side softboxes) served as a backdrop . Had Mokihana position herself about 15-20 feet away from the wall, and setup the camera so that we weren't shooting directly into the wall.

The Photoflex softbox went behind her, SB-26 1/2 power with a CTO gel. 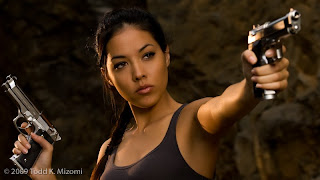 
For the casual look, Mokihana had a red outfit, so I wanted to find some greenery to work with. Walking through the parking structure near this wall, I found a narrow strip of foliage with some light coming from overhead. 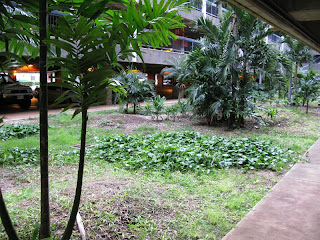 The sky was pretty overcast, and we probably could have gotten by with a reflector to get some standard portraits, but I wanted to go for a sunset style shot (in photographer-speak, that means "I forgot to pack my reflectors")

Took off the softbox, and the highlights were good, but now the rear flash was flaring into the camera (the rear flash was set pretty close to the model - just out of the frame to the right). So to remedy that, I put the black straw cereal box grid on that light and we ended up with this: 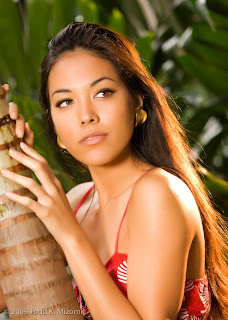 That's actually a little more overexposed than I usually like, but both the model and I agreed that we liked this look better.

I'm still going over the other shots that we took that day. More to come later.

If you found any of this interesting at all, let me know by leaving a comment, and I'll try to remember to do more behind the scenes stuff on my next shoot.
Posted by MauiPhoto at 3:15 PM 2 comments:

Christine is an up-and-coming young actress I met through ModelMayhem. We did a short photo session this past Sunday to help her add some new shots to her portfolio. I also got to experiment with my Lastolite Trigrip reflectors. 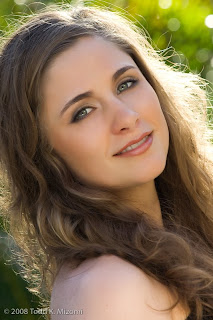 This was one of the first shots we did at her hotel. It was early morning, with the sun just coming up over the West Maui mountains. I noticed the sunlight glinting off the palm trees lining the driveway and thought it might look cool as a background. I positioned Christine about 10 feet in front of the trees, with her back to the sun to highlight her hair. I then used a Lastolite Trigrip silver reflector to bounce some light into her eyes. I shot it with a Canon 1D MkII and a 70-200 lens to throw the trees out of focus. 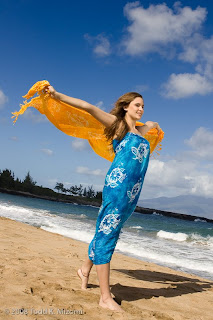 Christine's mom drove us down to DT Flemings beach for our next location. For this shot, I had her mom hold the reflector just out of the edge of the frame to the right, silver side again, to throw some fill light into Christine's eyes. I switched my lens to a 28-70 and put on a polarizing filter to darken the sky. 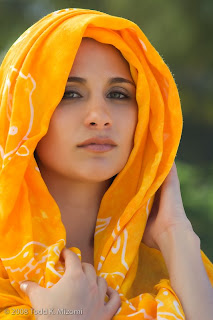 As we were wrapping up, Christine came up with this idea. Since the sun was pretty high up and the light was getting a bit harsh, I had her mom hold a Lastolite Trigrip 1-stop diffuser just above her head to soften the light for this final portrait.

We had to keep the shoot pretty short, as Christine had another session planned with another photographer for that afternoon, but we got some pretty good images out of the shoot.
Posted by MauiPhoto at 9:19 AM 1 comment: 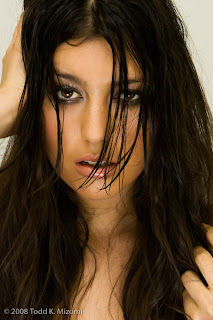 Because of airline restrictions, I wasn't able to bring a lot of lighting gear to Japan, and I wasn't sure what would be available to us in terms of lighting at the studio we rented until I got there. So I brought along my Strobist lighting kit consisting of 2 Canon 550ex strobes, a couple of umbrellas, stands, and my RadioPopper triggers (I really love those!)

To emulate a ringflash look, I setup one lightstand with two strobes firing through shoot-thru umbrellas, mounted one above the other in a clamshell style lighting setup. Both strobes were set on manual at about 1/8th power, and I positioned my camera between the two umbrellas. Image shot with a Canon 5D and 85mm 1.8 lens. 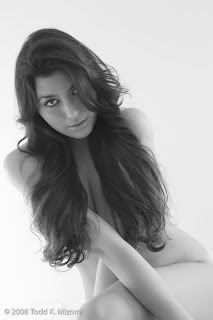 This one was done with the two shoot-thru umbrellas again, this time each strobe was mounted on its own stand. The lights were setup on either side of the model, slightly behind her, and aimed directly at each other. This served to both light the background and rim light the model.

Oh, and in case anyone is wondering, the model IS wearing clothes. It's the way she is posed that hides the bikini she is wearing. So it's kind of an implied nude, without being an implied nude.
Posted by MauiPhoto at 1:42 PM No comments:

I was lucky enough to work again with this model Stephanie, and the same team of stylists (Mai and Miho) that we had on our last shoot together last December in Tokyo.

For this shoot, we rented a small studio in Meguro, Tokyo. Since we had previously worked together, we were able to get through 4 different looks this time.

This is from our first setup. I found a king size white satin sheet set at a discount store, and the plumeria flowers from a Ben Franklin craft store on Maui. Lighting was with the studio's 4 hotlights, which were already set up for us.

Posted by MauiPhoto at 6:07 AM No comments: