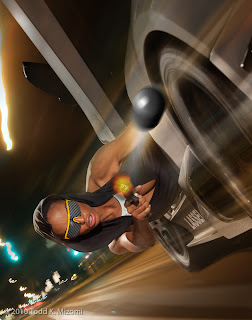 Towards the end of our shoot together, Yves mentioned she wanted to get some action images with our gun props and the Lamborghini that was parked in the garage.

I thought it would be cool to recreate the scene from Mission Impossible 3 where Tom Cruise hangs out of an SUV to shoot at his pursuers.

Since we had neither the crew nor the budget of a typical Hollywood movie, we had to cheat a little bit.

It was late in the evening so we kept the car in the garage.  I setup behind the rear wheels of the Lamborghini and used a sandbag to help position the camera nearly eye-level to the ground.

We shot Yves hanging out of the car with the gun and lit her as if she were actually in traffic.  We used 2 AB800s with 7" reflectors - one next to the camera position for the main light and one behind her for a separation light.  These were lowered as much as we could to emulate headlights from oncoming and rear traffic.

Shooting the background and road (in Hollywood special effects, these are called "plates"), required shooting on an actual road at night a few weeks later.  Usually if you're a famous photographer like Chase Jarvis or Joe McNally, you have a whole bunch of gear and crew at your disposal to make it happen.

For me, I had my wife drive me to Safeway one night while I leaned out of the passenger window holding my camera as close to the road as I could reach.  Didn't have any fancy gyroscope or suction cup mounts, so I just braced the camera against the side of our car to help steady the camera.  Very low budget.  Probably also very illegal and dangerous (don't try this at home kids).

Used a slow shutter speed of about 1 second to blur the road and the lights.  A problem with driving late at night on Maui, is that there aren't any big city lights to pass by and not many places are open around 11pm.  It took about 250 frames and multiple drivebys of Jack in the Box, McDonalds, and 7-Eleven before I got an acceptable image.

In creating the final image, I used streaks from one of the unused background plates and layered it over the model to give a sense of speed. The bullet was modeled in Lightwave and composited in Photoshop.

Posted by MauiPhoto at 8:16 PM

Todd! you are crazy in the best way! :) i love the wife driving you to Safeway part, LOL!

Incredible composite shot. Love how you broke it down too...very very cool!!