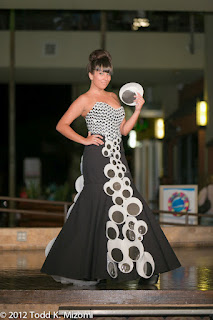 I recently had the opportunity again to photograph a fashion show by the UH Maui College Fashion Tech students at the Queen Kaahumanu Shopping Center.  I photographed their show last year as well and it's always fun to experiment with lighting as well as be inspired by seeing the amazing creations these talented students produce. 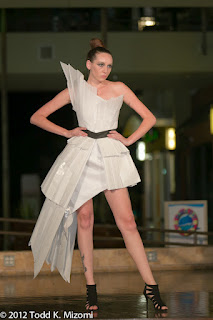 This year the title of the show was "Muse{ic}" - the students designed outfits based on their choice of music genre. 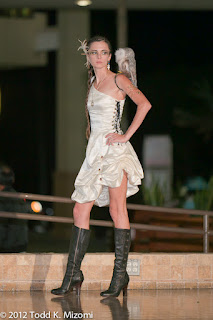 Lighting-wise, the location was very challenging. The existing stage lighting only covered the center portion of the stage. The sides as well as the runway were in the dark. 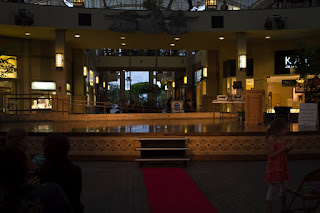 A total of 3 strobes were used to supplement the existing stage lighting.  2 Nikon SB26s were set up on Manfrotto 5001B lightstands behind the speakers on the sides of the stage (circled in red below).  The third strobe was a Canon 580EX II mounted to a flash bracket on the camera. 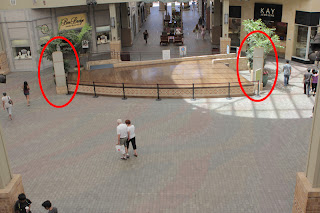 The two Nikon strobes were triggered by Pocket Wizard Plus IIs and were set to 1/64th power to add just a touch of edge lighting to the models when they reached the corners of the stage.  The two shots below illustrate the difference the edge lighting makes. 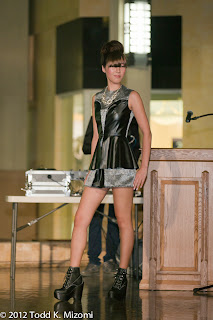 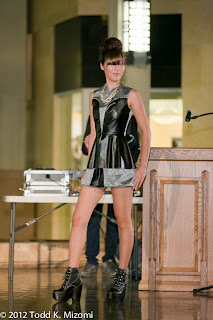 All three strobes were gelled with CTO gels and the camera was set to Tungsten white balance to match the existing stage lighting.

With this lighting setup, everything was shot in manual mode at iso 1600, 1/200 @ f2.8 to freeze the action and blur the background. The idea was to utilize as much of the stage lighting as possible while relying on the ETTL of the 580EXII on the camera to compensate when the models reached the dark corners of the stage and also when they walked down to the red carpet. 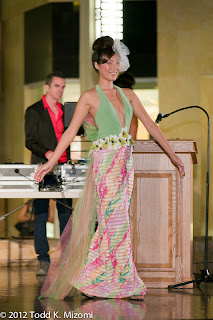 My camera rig consisted of a Canon 5D mkII and a WFT-E4 IIA Wireless Transmitter (transmitting images to an iPad carried in a belt pouch) with a 70-200mm f2.8L IS II lens, a ReallyRightStuff L bracket, and a 580EX II flash mounted on a RRS B87-QR Portrait Package Flash Bracket.  The flash was connected via an OC-E3 Off-Camera Shoe Cord to a Pocket Wizard MiniTT1 transmitter (to trigger the 2 Nikon SB26s) on the camera's hotshoe.  A CP-E4 External Battery Pack was connected to the flash to help with the recycle times.

The entire setup ended up being a bit heavy to handhold for the duration of the show.  Great for exercise, though. Thank goodness for image stabilization. 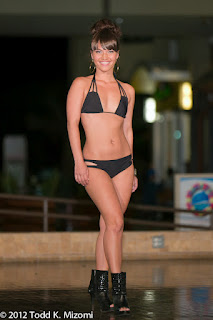 Because the models were constantly in motion, the autofocus mode was set to Ai Servo to track them as they crossed the stage. 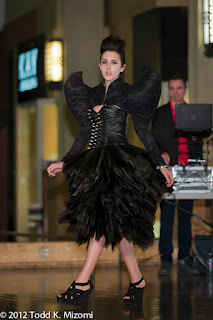 Looking through the 2000+ images in Lightroom after the show, the lighting setup we used seemed to hold up ok. In hindsight, it might have been nice to setup two additional strobes to crosslight the red carpet area, but being in a crowded shopping center made that impractical.  Ideally we would have had enough stage lighting available to light all the areas evenly so that we would not have needed to use flashes at all, but you work with what you have.  If any readers out there have shot fashion shows before and want to share how you did your lighting, please feel free to do so in the comments.
I posted samples of each model and outfit on a photo gallery on our facebook page.

Also made a short highlight piece for our Youtube Channel:


Things to remember for next year:

Bring a monopod.  Handholding that camera rig for a 1.5 hour long fashion show nearly killed me.  I'm not that young anymore. ;-)

Get larger cards.  Shooting in RAW, I went through 4-16GB cards in no time at all.

When shooting the models walking, try to capture them in full stride which usually results in a better looking image (either when the front foot just touches the floor or when the rear foot is just about to leave the floor)

Remember to get shots from front, back, and both sides.  Designers need to see all of the details of the outfit as much as possible.
Posted by MauiPhoto at 2:48 AM

Todd!! You rock!!! Thanks again for all your hard work and dedication. It means so much to us aspiring designers. :)