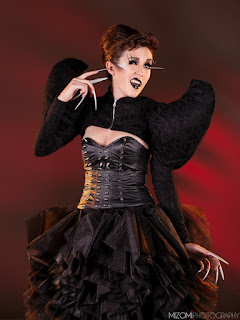 Our final look for the Kojo Couture shoot was a black dress covered in chrome spikes. Koa is a very talented designer and ever since I saw this design of his showcased in a recent UHMC fashion show, I knew I wanted to photograph it. 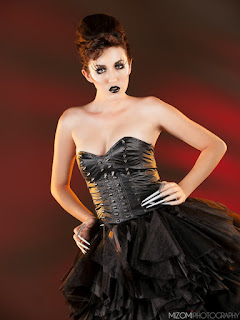 Ry-n really went to town on the makeup work for this final look, even going as far as to give Brittney a set of long Lady Deathstrike-style fingernails. 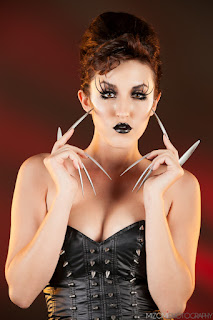 It was a challenging dress to shoot. Since the spikes on the dress were highly polished chrome and reflected their surroundings, they tended to disappear when shot in a dark environment like at the fashion show. 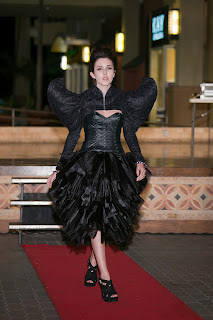 Taking a few tips from a recent workshop on tabletop photography by Don Giannatti, I figured that in order to get the spikes to stand out, we would need to surround them with lots of white surfaces to reflect. At the same time we still needed to control the lighting in order to keep the background dark so that we could light it separately.

We used four AB800 lights on the model - two of them with strip softboxes, egg crate grids and CTO gels were used to rim light her. The other two AB800s were modified with a large and a medium softbox, both with eggcrates and were setup in front to crosslight her. We used two white V-Flats positioned close to the model. This both keep the rim lights from flaring into the camera and also gave the spikes lots of white surfaces to reflect. 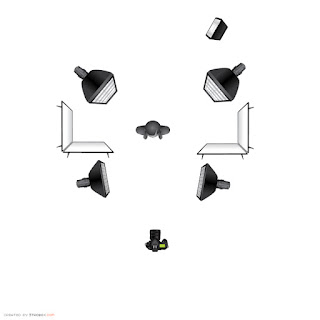 A single Nikon SB26 with a red gel was used to light the background. To get the pattern on the wall, we placed the SB26 in the ribcage of a skeleton. 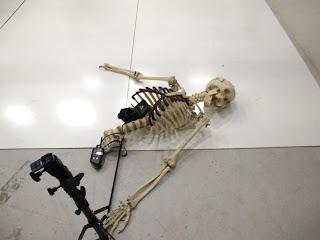 We had experimented with using a skeleton as a pattern maker on a previous shoot, and I thought it might work well in this instance since I wanted to evoke the feeling that Brittney had slashed the background with those long nails.

It took us a good 15-20 minutes of test shooting and adjusting the placement and angle of the skeleton and the flash within it before we were able to get a satisfactory pattern on the background. 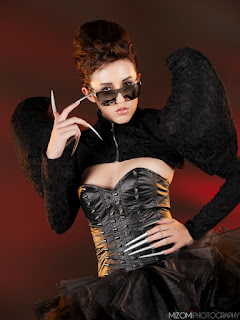 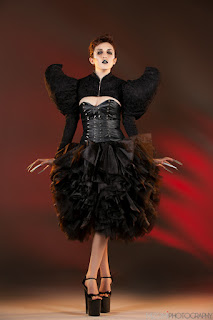 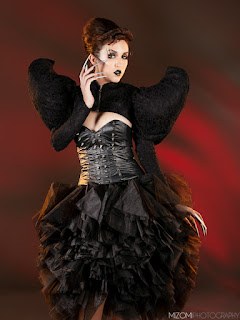 Things I need to remember next time:

Clean the floor! Have to remember to continually sweep up dust and shoe prints on the white tileboard during the shoot so that I don't have to spend hours taking it out in Photoshop later.

If we can scrounge up enough apple boxes, gonna try elevating the white tileboard next time. This would give us a little more flexibility on placing the background effects lights without having them showing up in the frame.

Posted by MauiPhoto at 8:14 PM