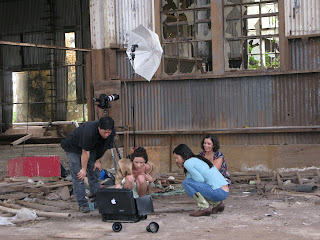 I really like shooting tethered to the computer during a photo session because it allows for greater collaboration. Having the images come up on the computer screen during the shoot makes it much easier for everyone - the makeup artist can check for touchups, the model can refine her poses, the stylist can fix any stray hairs, and the photographer can check lighting and focus. It's also much easier on the eyes than having everyone crowd around the tiny LCD on the back of the camera.

My usual setup for model photo sessions is a 15" MacBook Pro, a 19" LCD external monitor, a Canon 5D, and the Canon WFT-E1 transmitter which sends the images from the camera to the computer over WiFi. I like it because there's no cables, which makes it easier for the photographer to move around to get the shot. 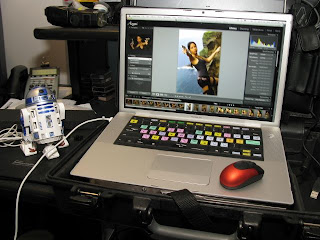 While this is great for shoots in studio, it's not that great when you're out in the field, especially at the beach. Sand gets into everything and you're always having to keep an eye on your gear in case it decides to grow legs and walk away from you.

I had been looking for a lower cost solution to use in the field. It took a while, but I found the solution in two parts - a Mac netbook and a wireless SD card.

Netbooks have become very popular recently, due to their low cost and their ability to do about 90% of what most people use a computer for - browsing the web, checking email, viewing video clips, etc.

Apple still doesn't make a netbook, so many people have taken to hacking low cost netbooks such as the Dell Mini 9, Lenovo S10, and MSI Wind to run Mac OS X. You can see a list of compatible netbooks here. 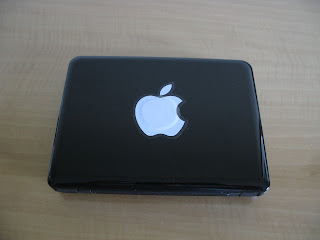 I chose to use the Dell Vostro A90, as it was available from Dell for less than $200, and is pretty much the same as the now discontinued Mini 9 in that it is one of the most compatible netbooks to run OS X on.

I found a very easy to follow guide for installing Mac OS X on this netbook. Once I installed 2 GB of RAM and a 64GB SSD, I had it up and running within a day.

It boots up and runs pretty quickly due to the SSD. I have Photoshop & Lightroom installed on it (Yes, the netbook DOES run Photoshop) and I am planning to use it in the field (the screen is only 8 inches so I'm mainly using it just to check the shots as they go into the computer). This will save a lot of wear and tear on my 15" MacBook Pro. The next part was the wireless solution. The Canon WFT-E1 is a pretty big unit which attaches to the bottom of the camera via USB or Firewire. It's very bulky and expensive (about $1000). Canon has since come out with newer versions of this device which incorporate the Wifi transmitter into the extended grip for cameras such as the 5D MkII, the 40D and 50D. 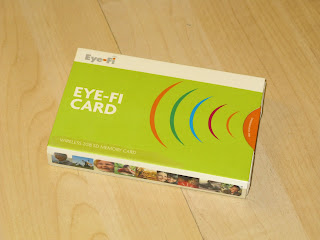 A few years ago a company called Eye-Fi came out with an SD memory card for around $100 that included built in wifi capability. It was a pretty amazing product at the time (WiFi from an SD memory card? Wow!), it was very limited in that you needed an internet connection for it to work. It was mainly intended for consumers to upload images directly to the web from the camera. While you could upload from your camera to your computer, both had to be on the same wireless network, meaning you needed a router for the connection to work. It unfortunately did not support ad-hoc connections directly between the camera and the computer.

Thankfully, a few months ago they introduced the Eye-Fi Pro - a 4GB SDHC WiFi card ($149.99) that DOES support ad-hoc connections. This now does about the same thing as my WFT-E1, but for about $850 less. It took some time to get it setup properly. You need to use a web browser and connect to their website to do the initial setup for the card. Firefox gave me some problems when I tried to switch on the adhoc connection on the netbook to set it up in the Eye-Fi manager software. But once I got it worked out (hint - use Safari to do the web setup), it was smooth sailing. The Eye-Fi website has a forum which was a big help in getting the problems worked out.

So now with this setup, it looks ready to roll. On the Mac netbook, I go to the menu and select "Create Network" and set up an ad hoc connection. I insert the Wifi Pro card into my Canon Powershot G9, turn it on, and we're good to go. I click the shutter and after about 12 seconds, the images pop up in Lightroom. The Eye-Fi Pro supports transmitting both JPEG and RAW files, but for now I'm just having it send the JPEGs to the computer for preview purposes only (I transfer the RAWs from the card back at the office)

I showed this to my buddy Chaz from After6Media, and his first reaction was "I gotta get this!" ;-)

In preliminary distance testing, I was able to get the camera to transmit from a distance of about 70 feet (couldn't test out further because that was the length of the room I was in at the time)

I haven't tried it with my regular cameras yet, as they use CompactFlash media instead of SDHC cards. I do have an SDHC to CompactFlash adapter card that I will use to test in my 5D. I'm also thinking of using it in my 1D MkII which has slots for both CompactFlash and SDHC.

With the Mac netbook, the Eye-Fi Pro, my Canon G9 and a Strobist light kit however, I think I may have found the ultimate mobile mini studio. I'll be testing this out in the field in a couple weeks and will post the results.
Posted by MauiPhoto at 8:08 PM

Wow.... nice... I will probably go for the same solution as you. Please post some review on how your setup worked on the field.

good photos for you