Saturday was the first time I got to do a real field test with my Radiopopper gear. At the same time, I also tested out my Mac netbook and Eye-Fi wireless card. 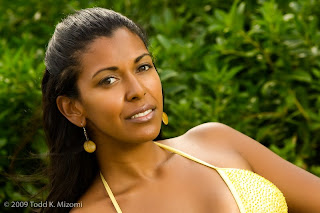 The model was Jackie, a model I met thru Model Mayhem. The lighting for this is a Canon 580EX and a Lastolite EZYBox Hotshoe softbox triggered via a Canon ST-E2 transmitter and Radiopopper triggers.

Using the Radiopoppers was pretty easy. I pretty much left the camera on Aperture Priority mode and let the flash unit do all the calculations to balance the fill flash with the existing light.
The Ezybox softbox did a pretty nice job of softening the light. Here it's being held about 5 feet from the model on camera right.

At the same time I was doing this , I was also testing out the Eye-Fi wireless card and netbook that I previously mentioned. I had the Eye-Fi card in the SD slot of my 1D mk II and was able to get it to work pretty easily and a fair amount of distance from the netbook (about 20-30 feet)
The only problem I encountered was because I was shooting RAW, it took a very longtime to transfer over. Jpeg transfers were pretty quick, taking about 12 seconds or so. 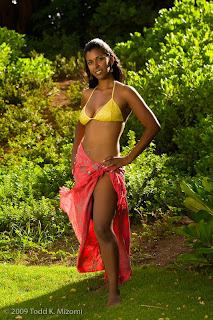 On the newer 1D mkIIN and the 1DmkIII, there is supposedly a way you can save RAWs to the CompactFlash card and just Jpegs to the SD card. I think that would be ideal for me as it would make the transfers much faster, but unfortunately, my older 1DmkII does not allow that. It only lets me backup from card to card, and since I shoot RAW, it backs up the RAW files as well. If I were shooting just Jpegs, it would have gone much faster. Guess it's back to the WFT-E1 for now. 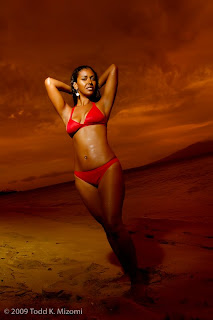 The weather that day wasn't really cooperating with us - there was a huge cloudbank on the horizon which hid most of the sunset. While we were waiting for the sun to hopefully peek through under the clouds, I setup this shot. Using a blue gel, I custom white balanced the camera, then put the gel on the strobe (AB800 with 11" dish) to get this result. I tweaked it a little in Photoshop to bring in the sky a little more.
Posted by MauiPhoto at 8:24 PM

impressive how you can do both video and photo!

great work as usual todd... too bad I missed it...

so you're really happy with those radio poppers huh? i'm thinking of buying some for myself too...